Whether it’s a MacBook Pro that’s always out on the road with you, or a Mac Studio that gets left in an office, your Mac holds critical data and you’ve got to back it up.

Apple works very hard to make it so that you don’t have to consciously think which of your computers you need to use. You can start writing a sentence on your iPhone and finish it off on your Mac Pro without thought.

But that same way your data is available to you across all your devices is also a way that tricks you into thinking it’s all safe. If your MacBook Pro is stolen, at least all the data is still on your office Mac, for instance.

That’s not entirely wrong, but it’s still dangerous. If you delete something on, say, your MacBook Air, it can be deleted everywhere.

There may be ways to get it back through iCloud’s own backup, or Dropbox’s, but only for a certain time. And if you don’t happen to save documents in a cloud service at all, you have little chance of getting them back.

Not unless you have a proper backup system.

You have options, yet no choice

The reason you have no choice is that if you do not backup your data, you will lose it. Maybe not today, maybe not tomorrow, but some time.

But broadly, your choices are Apple’s own Time Machine, third-party backup software, or online backup services.

In every possible way, Time Machine is the easiest backup system to use. It’s even the easiest to get since it’s already waiting there on your Mac. The sole extra thing you need is an external hard drive, the same as you do for all of these backup systems.

When you plug a drive in and go to format it, your Mac will even prompt you to use it as a Time Machine volume. If you decide to, that’s pretty much it — job done. Your Mac will regularly back itself up to that external drive.

You can go further and say when you want that regular backup to happen, plus you can choose what actually gets backed up. There are far fewer options you can set compared to any of the other backup apps here but Time Machine is meant for you to set up and forget.

It’s meant to be that you never have to think about it again until you lose a document and want to get it back.

So, that could be that, Time Machine could be the right – and the whole – solution for you. However, get another one as well.

Time Machine is remarkable for what it does and that it is built right into your Mac, but it has problems.

The most immediately obvious one is that it is notably slower at backing up than any of these other apps. Compounding that, it has no tools to check that the Time Machine backup drive is healthy.

We’ll put up with a bit of slowness if it means our data is safe, and we’ll use multiple Time Machine backups across different drives so we’ll cope if one goes wrong.

But, what makes us so certain that you need an alternative is this seemingly small point. Time Machine is built to be a backup of your data, not your hard drive. As such, a restoration from Time Machine can take time.

Get Time Machine and a separate clone drive

With all of the others, you can have these apps create an exact, bootable, clone of your Mac’s hard drive. It is like having an extra thorough backup that copies off every single possible thing that is on your drive, but it’s much more useful than that.

Say your Mac gets stolen or otherwise croaks, but, being the wise owner you are, you’ve got backup hardware in your garage to keep working. Take a machine out from your stash, plug in the drive that your backup app has prepared, and the new Mac will start up as if it were the old one. All of your same data and applications in the same place, ready to run — immediately.

However, as well as a third-party backup app, there is more. You have to setup the external drive to be bootable, and that takes more steps since the introduction of ever greater security on Macs.

So, we do recommend Time Machine for what it is, and the fact that it’s free — but it isn’t a complete tool for speedy disaster recovery. 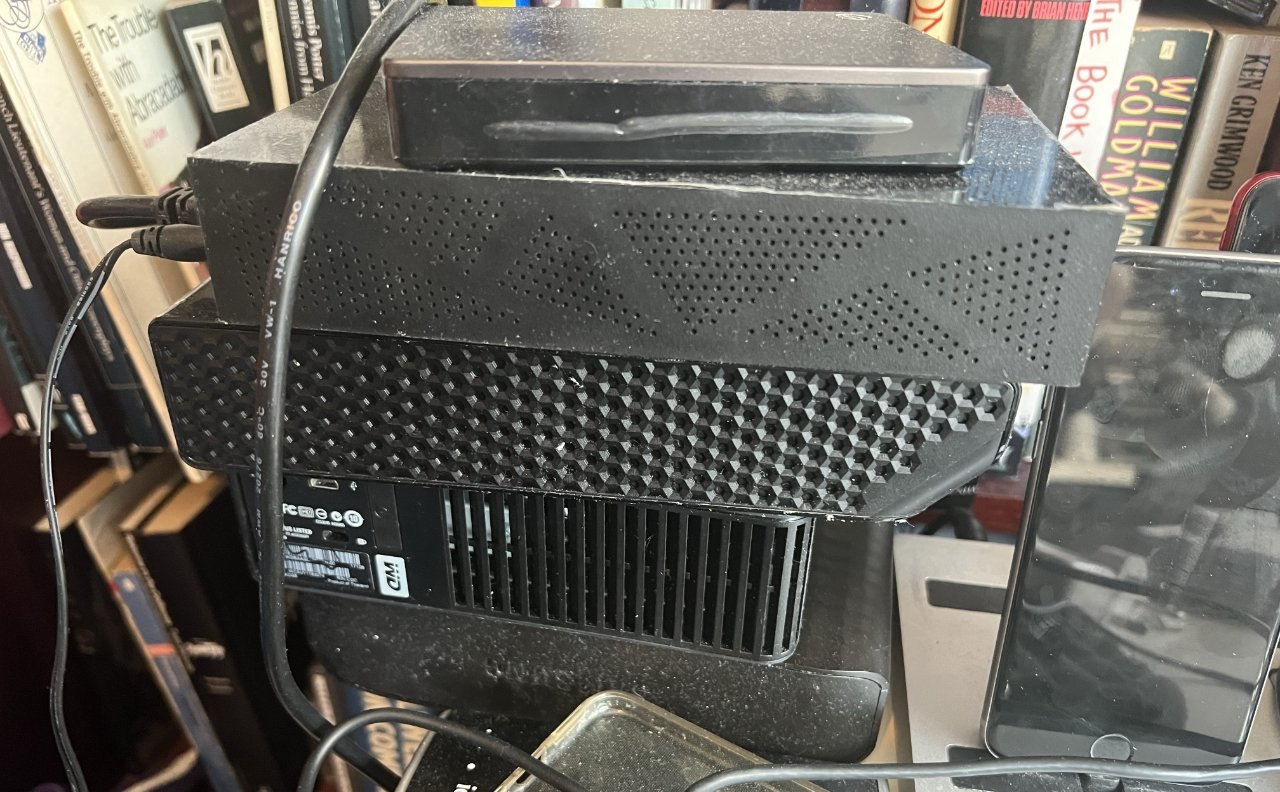 The main third-party backup apps are SuperDuper!, ChronoSync, and Carbon Copy Cloner. Any of them will work well for just about any user, but there are differences that mean one may suit you better than the others.

Like Time Machine, they do also require you to have a space drive or two. In every case, you can plug in a drive, do a backup, and unplug it.

That does require you to manage the drives and remember to manually make the backups, though.

SuperDuper! 3.6.1 aims to be “for mere mortals,” and can be used by just setting what drive you want backed up to which other drive. Choose your drives and then set the backup running with a click.

There’s a generous free trial version you can download, but once you’ve tried it out, pay the $27.95 purchase price. It does get you small extra features, but it’s also a very small price to pay for having backups done easily.

It’s a fine line, though, with both of these apps offering features you quickly grasp and others that you have to think about. Much of the real difference between SuperDuper! and Carbon Copy Cloner comes down to personal preference.

However, there is a feature in Carbon Copy Cloner called task chaining. It lets you set up multiple backups in a row.

If that richness of multiple timed backups appeals to you, however, look at ChronoSync or ChronoSync Express.

The makers of ChronoSync Express describe this version of the app as being for “entry-level sync and backup.” It can’t backup every file on a Mac, it will only do “documents that can be accessed by the logged-in user.”

So the Express version isn’t as powerful as Carbon Copy Cloner, or SuperDuper! It is, though, available as part of the Setapp Mac subscription service.

That means it is included in Setapp’s monthly fee from $9.99. It’s also available to buy outright directly from the developer, or from the Mac App Store, for $24.99.

The same developer also makes the full ChronoSync, which costs $49.99. It backs up entire drives, not just documents, and so is able to create a bootable clone.

So if you delete one file, you can get it back easily. And if you lose everything, you can be back running with it all as soon as as you can plug your backup drive into another Mac. 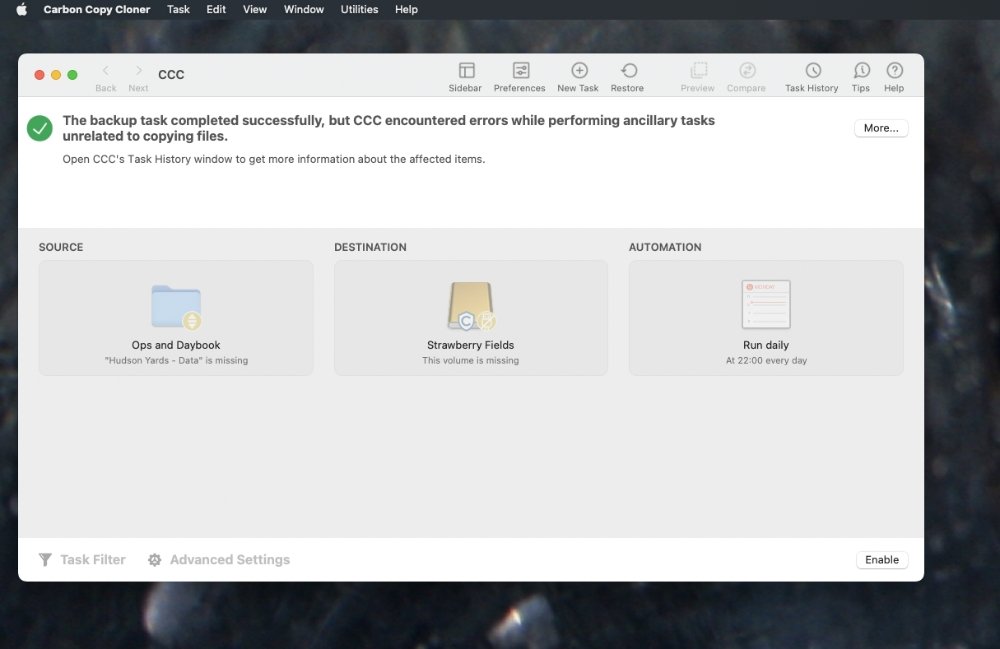 As well as the reassurance of being backed up, apps like Carbon Copy Cloner make sure you know of any problems.

There is an alternative to using any of these apps, whether Apple’s or the third-party ones. In practice, it’s an option that should be used alongside them, but it is a complete backup solution in itself.

It’s an online backup. You don’t connect any external drives and the data is stored remotely, so even if your studio burned down, all of your data would still be available to you anywhere in the world.

There used to be several firms providing online services, but it appears to have whittled down to just one. Backblaze will now charge $7 per device, per month, to back up everything.

That is everything, though. If your Mac has a couple of 2TB drives permanently plugged into your Mac, those drives get automatically backed up too.

It is amazingly convenient. You can sign up and forget that the service even exists, until you need it.

Or rather, you can once the initial backup has taken place. You can speed this up by sending a drive to Backblaze, but otherwise everything on your Mac is backed up over the internet.

Which means if you have a lot of data, and a slow connection, it can take days or weeks. It’s been known to take months.

Equally, if everything dies and you need it all back, it’s an issue. Again it can take an extraordinarily long time to redownload everything, but you can also get Backblaze to send you all of your data on an external drive.

Get your back up

There isn’t really one backup solution that fits everyone. You need to mix and match services to build something that works for you, in a cost-effective and data-safe manner.